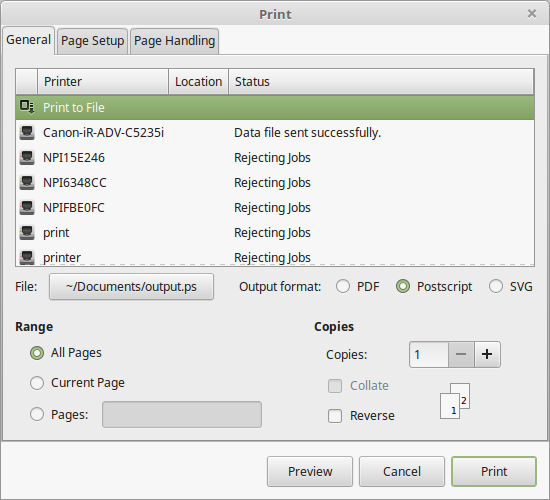 If the PostScript and PDF files are of a level which the printer can handle directly (via the PostScript or DirectPDF interpreter, as appropriate), then: You could use the ' lpr ' command to send the content of the file(s) direct to the port 515 responder in the printer. To send a PCL file to an HP printer when the version of the PCL in the file matches the capabilities of the printer you need to send the file as raw data. Hp Dc5100 Drivers Audio Realtek here. RAWPRN In earlier versions of Windows you could use Microsoft RAWPRN.EXE utility to send PostScript or PCL directly to a printer capable of interpreting it.

I've been given a requirement for an internal web application to send documents to a printer transparently. The idea would be that the user can select their nearest printer, and the web application would send their print jobs to the printer they selected. The first printer we have to roll out against are Canons, so my questions is: How would I go about sending a document to print aross the network to a specific Canon? The type of Cannon is question is an iR5570 and the documents that will be said will mainly be Word and PDFs I'm currently working my way through the terrible, IE only Canon Developer site, but I'm kinda hoping someone can point me in the right direction or point me at a 3rd party assembly:). The key phrase in that question is 'web application'. In a normal web app using only HTML+Javascript over HTTP, you can't just send a document directly to a printer. That's one of the reasons web browsers exist, and without that functionality everyone's printer would collect the same kind of junk that a public fax machine does.

So you need some kind of work-around. One option is to build on a common plug-in, like flash, silverlight, java applet, or even something like greasemonkey. Another is a custom plug-in, like a hosted winforms control or custom browser extension. Php Serial Port Communication Linux Tutorial. You are very fortunate, in that it looks like you have complete control (or knowlege of) the deployment environment, and that this environment if fairly homogenous. This means you have an additional option that others have started to explore.

If you can install all of the printers in your environment to the web server, then it's fairly easy using the built-in.Net printer classes (in the System.Drawing.Printing namespace) to list out those printer, either show them to the user so they can pick or keep some kind of IP to Printer mapping table, and then print directly to that printer from your web app. Note that this scheme may require your app to run at a higher level of trust than would otherwise be required. Now it comes to actually printing your PDF's and word documents.

For acrobat, check this link: (Wayback machine) Note that it's a little dated, but I believe the concept is still valid. You'll have to experiment some to make sure it works as expected. For Word, I'm not normally a fan of Office interop/automation in a web app. But in this case you're not editing any documents: just loading it up long enough to print.

And the fact that you're relying on another scarce resource (the printers) should keep this from scaling beyond what your web server could cope with. So you may have a rare case where Office automation in a web project makes sense. Many printers and multifunction devices today support the printing of PDFs directly, this may solve one of your problems. Simply have the PDF sent to the printer. In fact, some even support the sending of a URL and the printer will then go get the document and print it. Lexmark for sure does this and I think a few other vendors do as well.